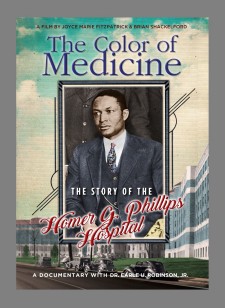 LOS ANGELES, April 28, 2020 (Newswire.com) - COVID-19 has hit the United States harder than any other health crisis ever before, and it has become impossible to ignore the fact that the African-American community has been particularly vulnerable. The disparity between the medical treatment that this community receives, as opposed to others, has never been more evident than it has been during this time and is a major cause for concern.

Vision Films, in association with Flatcat-Productions, LLC, and Tunnel Vizion Films, Inc., is proud to present The Color of Medicine: The Story of Homer G. Phillips Hospital, the ground-breaking documentary that captures the long, important battle that African-Americans have fought to receive quality medical treatment and training. This timely film not only tells the astonishing history of the first all-black hospital in St. Louis but also recognizes and celebrates the achievements of the brave healthcare workers who were among the first black physicians and nurses to be medically trained in the United States.

Directed by Joyce Marie Fitzpatrick and Brian Shackelford, The Color of Medicine: The Story of Homer G. Phillips Hospital explores the role the hospital played in being one of the first institutions in the country to treat African-Americans in a safe, hygienic and sterile environment. The opening of the hospital meant that African-Americans in the community were no longer without medical care or resorting to illegal and dangerous methods of treatment. Homer G. Phillips Hospital was of utmost importance from its opening in 1937 to its dramatic closure in 1979, which incited riots in its neighborhood of “The Ville.”

Boasting the largest number of black doctors and nurses in the world, Homer G.Phillips Hospital opened its doors in 1937 during a time in history when America still had segregated medical facilities. Through first-hand accounts, witness the controversial history of the hospital’s medical training and how it continues to affect the lives of its practitioners, patients, and community. While its founder attorney Homer G. Phillips was mysteriously killed, the hospital in his name thrived during the most turbulent of segregated times, allowing so many people of color to achieve greatness for the benefit of humankind.

The Color of Medicine: The Story of Homer G. Phillips Hospital will be available on May 12, 2020, on digital for an SRP of $4.99 - $9.99 from platforms including iTunes, Vudu, Google Play, Xbox, Amazon, and FandangoNow, as well as cable affiliates everywhere and to buy on DVD for $12.99 online at all major retailers.

For more information, or to request an interview or screener for review: