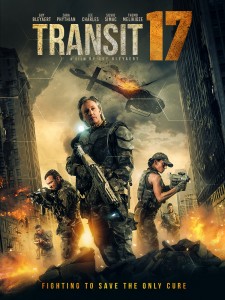 LOS ANGELES, December 12, 2019 (Newswire.com) - ​​​Vision Films Inc. is proud to present the new action thriller coming soon to DVD, Transit 17. Set in a dystopian world that has been torn apart by a deadly virus, Guy Bleyaert’s high-intensity new film crosses genres with its incredible action sequences and terrifying imagery, making this an instant new favorite for action, sci-fi and horror aficionados. This highly anticipated new film will be released in the United States and Canada across all major streaming platforms and on Oct. 22, 2019, and on DVD online and in Walmart stores Dec. 17, 2019.

“This production was really something special for me. I wanted to give it a certain style with a mixture of sci-fi, action and creatures in the story," says Guy Bleyaert. “I loved having full control over the script and production design, and I really wanted to give it my own touch. That said, I must admit it came with a lot more effort and work for me then expected.”

“Vision is very proud to be presenting Transit 17," says Vision Films Managing Director/CEO, Lise Romanoff. “This intriguing film, which contains a huge amount of special effects and action, is an absolute achievement for the filmmaker, who wears many hats, Guy Bleyaert. We are excited to be bringing it to the world.”  ​